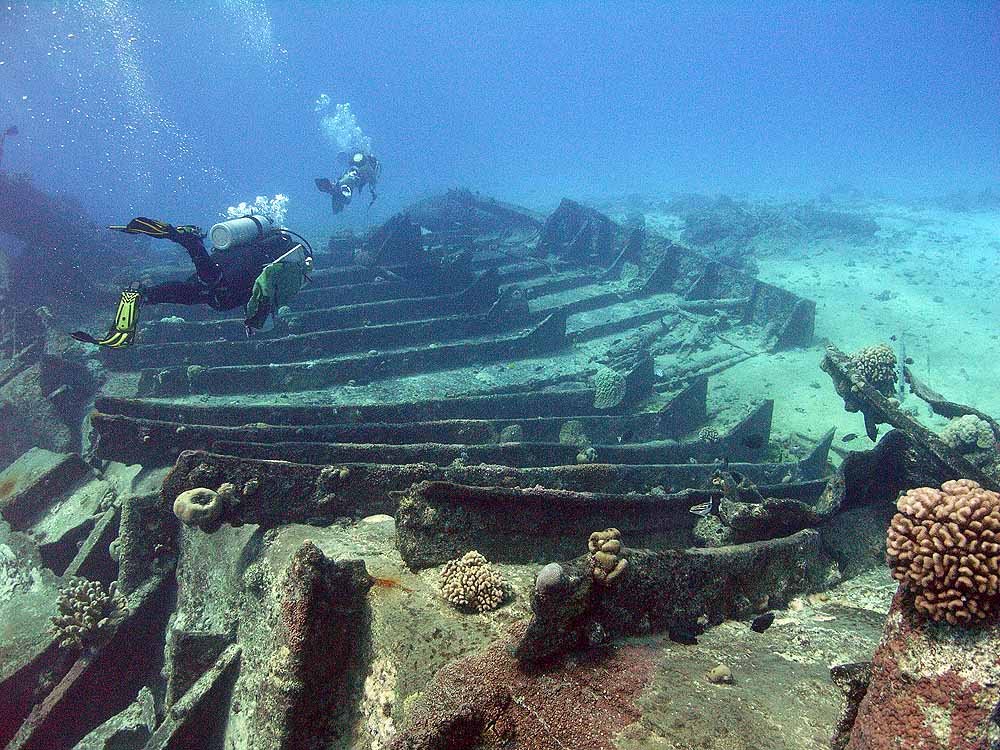 Visiting archaeologists have touted the prospects for heritage tourism in the Northern Marianas.

One of them, Dr. Jennifer McKinnon, had completed in 2011 a project, WWII Maritime Heritage Trail–Battle of Saipan–a self-guided underwater tour of military hardware left in the wake of the fierce WWII battles.

In April 2011, Dr. McKinnon provided a lecture at the American Memorial Park on Saipan, to give the general public an idea of what the trail was all about.

“It is s self-guided tour. You choose your own adventure,” she said adding that anyone could opt to visit an LVT site or plane wreckage in one day, either individually or as part of a group.

Among the potential sites on the trail, Dr. McKinnon mentioned a Grumman TBM Avenger, an American torpedo bomber, is found 10 feet underwater laying upside-down with its landing gear jutting up. The aircraft is one of the more widely produced naval strike aircraft in history. They were used during the Marianas Turkey Shoot and were relied upon to knock out Japanese installations in preparation for the invasion.

Meanwhile, in Tanapag, there’s the wreckage of a Kawanishi H8K, also known as “Emily” located some 30 feet underwater. The site shows the aircraft’s gun turret (with machine gun still sticking up), cockpit with chair and controls, painted fuselage (in gray and red paint), and propellers.

Dr. McKinnon’s team was intrigued with the site of an Aichi E13A or “Jake” — Japanese long-range float plane. The Japanese plane’s wreckage found upside-down in 23 feet underwater piqued their interest.

“There’s a large section of landing gear that is not associated with this plane,” she said claiming that the plan may have been dumped and dragged to the site.

During the 2011 lecture, Dr. McKinnon said that they would continue to look into historical documents to prove their theory.

Other sites on the trail include the Japanese freighter Shoan Maru, a possible submarine chaser, a Daihatsu Landing Craft, Sherman tanks, and more.

The potential submarine chaser they found lying on its starboard side with an intact bow structure and collapsed and disarticulated hull section.

They found two of the Daihatsu Landing Craft sitting 350 feet apart from each other. These were used by the Japanese landing forces.

Dr. McKinnon’s team, which worked closely with local regulatory agencies like the Historic Preservation Office, CRM, among others, produced guides, brochures and posters with support from a grant they secured from the American Battlefield Protection Program.

Meanwhile, their public outreach was made possible through the NOAA Marine Education Training Mini Grant program that helped them run the two trainings in heritage awareness on April 12-16, 2011. Dr. McKinnon and Dr. Della Scott-Ireton of the Florida Public Archaeology Network conducted the trainings.

For Dr. McKinnon, “You can’t put something into place without knowledge about how to use these resources and heritage.”

Please visit http://blog.ecu.edu/sites/pmht/ for more. Kudos to the photographers and the National Park Service. Most especially, congratulations to Dr. Jennifer McKinnon and the team for a great job!