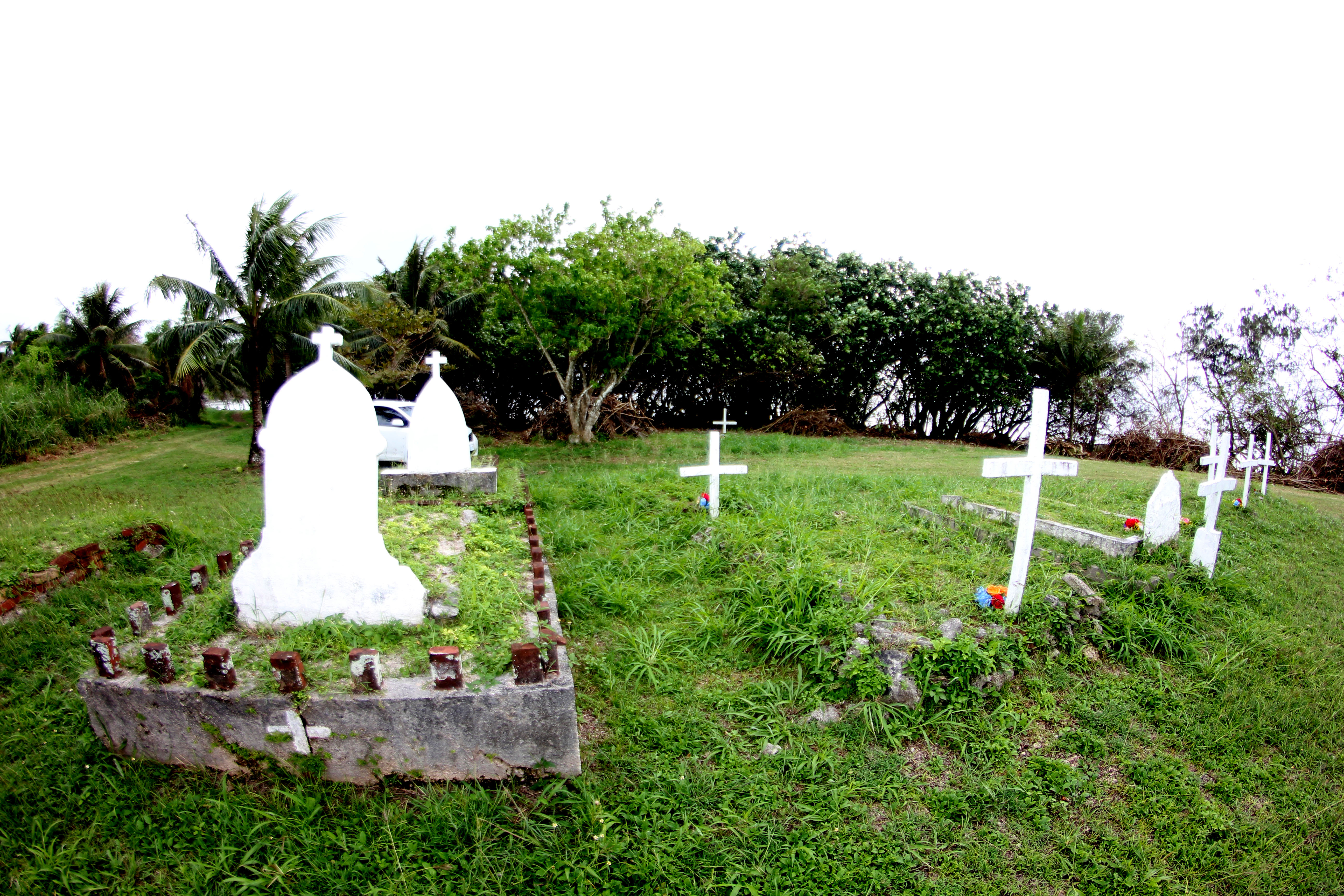 “NAVY SELECTS TINIAN FOR A LEPER COLONY,” the New York Times reported on June 6, 1948 citing an announcement made by Pacific Fleet commander-in-chief Admiral DeWitt C. Ramsey at Pearl Harbor on June 4, 1948 that a facility would be built in the former base in the Northern Marianas for people with Hansen’s disease or leprosy.

According to the New York Times report, Tinian was selected for this facility because it was close to the center of logistics support for the western Pacific area.

At the time of Admiral Ramsey’s announcement, Tinian had 275 residents and was site of a commercial farming project.

“I feel that medical care of the natives is one of the most important things the United States can do in carrying out its trust territory mandate,” the admiral stated.

The facility set up to combat Hansen’s disease in the region initially had 65 patients, according to Lt. (jg) Jack W. Millar who volunteered to take charge of the colony on Tinian in his communications with the national leprosarium in Carville, Louisiana.

The Star, the official publication of the Carville institution, noted that the opening of the colony was widely publicized.

With Lt. Millar at the helm of the colony on Tinian, he would be assisted by two medical corpsmen.

Citing he wanted to name the settlement “Hansen’s Colony”, Lt. Millar stated that they would like to do something to eradicate the misused name of leprosy. “We also hope to add further to the knowledge and therapeutics of the disease,” he told The Star.

Prior to his Tinian assignment, Lt. Millar trained under the supervision of Dr. Norman R. Sloan at the Ka’aupapa facility on Molokai in Hawaii regarding techniques in the treatment and care of patients with leprosy.

According to the Carville publication, the Tinian colony would be using newly developed sulphone drugs by the British: Promin, Diasone and Promizole.

Moreover, the Tinian Hansen’s colony started with 24-bed dispensary, up-to-date laboratories and facilities, according to reports. Within the settlement there were 79 individual housing units, power plant and water system, church, staff quarters, laundry area, school for children, fishing and farming equipment, among others.

When Lt. Millar’s term ended in 1950, he was replaced by Dr. Gordon C. McNeilly who familiarized himself with various treatment techniques at the Carville leprosarium for a month prior to relocating to Tinian with his family.

The WWII Navy veteran was pleased with the opportunity to work at the settlement on Tinian as he and his wife had been looking into missionary work either in India or Africa to assist patients with Hansen’s disease.

Lt. McNeilly said he wasn’t trying to be a hero but he thought those patients needed help and he thought he should do all he could.

By Nov. 30, 1950 when Lt. McNeilly had had time to settle and to get started with his assignment, he reported to Carville that the colony had 101 patients, of whom 60 had the tuberculoid type; 28, lepromatous type; and 13 had yet to be classified.

Meanwhile, according to a Navy report, services provided by the leprosarium on Tinian and by the hospital ship USS Whidbey were free.

It had been a major priority of the U.S. Naval administration to oversee a comprehensive public health program in the Trust Territory islands. “Improvement in the health of the Micronesians continued to be one of the principal aims of the administration during the trusteeship period,” stated the 1957 Navy report.

The USS Whidbey early on conducted a survey of 120 island communities in the Trust Territory and gathered disease statistics and sanitation data from 1948 to 1951.

The medical survey by USS Whidbey revealed that tuberculosis, intestinal parasitism, and yaws were most prevalent in the islands.

The medical ship doctors reported that 83 patients on Saipan and Palau had suspicious cases of leprosy; but refrained from making a diagnosis absent a finding by specialists.

The Trust Territory government, citing a 1930s survey on Guam had early on expressed its fear that Hansen’s disease had been endemic in the region. This led to the conduct of a medical survey to determine how widespread the disease was. In September 1947, 52 cases had been isolated. They thought that provision of treatment and necessary facilities was needed.

This precipitated the idea of having a central leprosarium to be built on Tinian that would provide care for patients with Hansen’s disease from the Trust Territory, Guam and American Samoa.

During the planning in 1947, it was proposed that Kagman village on Saipan would be a more desirable location than Tinian because of adequate suitable land for cultivation, a beach for fishing, and sufficient water supply; however, the Army’s need for the site led to the revival of the Tinian option.

Temporary facilities for 100 patients were constructed in early spring 1948, according to a Trust Territory report. “By the fall of that year the leprosarium consisted of 50 housing units, each 10 by 16 feet, eight cookhouses, four pit type latrines, one boathouse, and two buildings containing an office, laboratory, examining room, and operating room.”

During this period, five babies were born to mothers with Hansen’s disease and these babies were separated from their mothers and sent to relatives.

A total of 97 families were at the facility.

By 1955, with the patients mostly from Eastern and Western Caroline Islands, it was decided that two smaller facilities on Yap and Ponapei would be able to meet the needs of the patients. Leprosaria were also established in Koror and Majuro.

With the repatriation of these patients to their native communities, the U.S. Navy subsequently closed the Tinian Hansen’s colony. According to the International Journal of Leprosy, the site was “deliberately destroyed by fire on August 25th (1955)” and that due to health and sanitary reasons, the building could no longer be used again.

Hansens’ disease still a threat to the Pacific islanders

Hansen’s disease had been eradicated in most parts of the world, except for some areas in the Pacific where it continues to persist.

A 2014 report by Giff Johnson stated that despite global efforts at eradicating the disease, the Marshalls, Federated States of Micronesia and Kiribati continue to deal with this problem. A World Health Organization report, Johnson stated, had listed the three areas with the highest incidence of leprosy.

In September 2014, there were 94 new and old cases being treated for leprosy — “a rate of 17 people with leprosy per 10,000 people. The actual rate is likely substantially higher than this.”

Johnson reported that there was “a steady flow of newly identified cases of leprosy in adults and children during the Marshall Islands fiscal year from October last year (2013) to September this year (2014), with 59 new adult cases and 24 new cases among children 14 years and younger.”

*Leprosy and the leprosarium during the Spanish Period

Before 1899, Guam, Saipan, Tinian, Rota, and the rest of the Marianas were under Spanish colonial rule with the majority of the population settled on Guam.

According to Guampedia, in 1831, Spanish Governor Francisco Ramon de Villalobos ordered the construction of a leper hospital in Adelup on Guam.

Subsequently, the colonial government moved patients with Hansen’s disease to the leper colony on Tinian in 1835. A small pox epidemic led to the facility’s closure in 1837. Reopened in 1855 during the Administration of Governor Felipe Maria de la Corte, the leprosarium stayed open until after the drought in 1888 and the relocation of the remaining Carolinians on Tinian to Saipan.