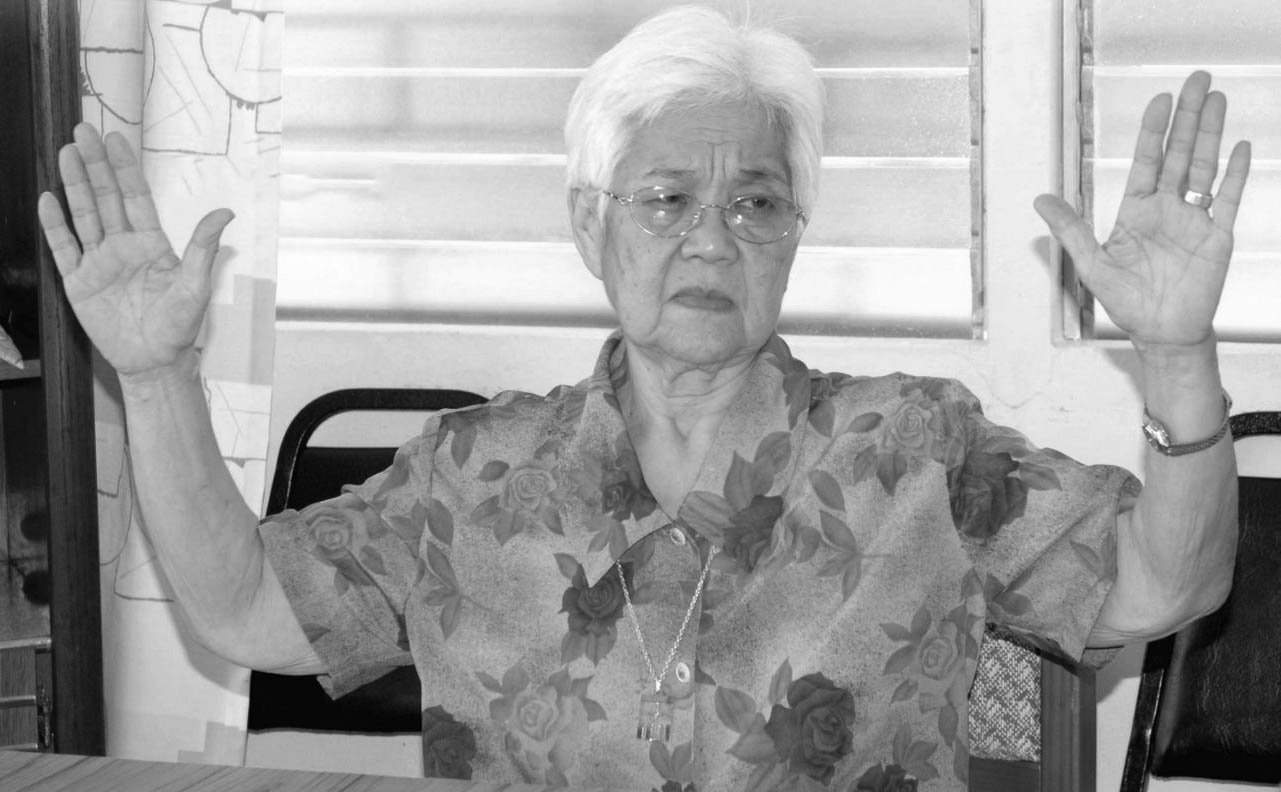 [Note: I first wrote about Sister Tonie of Maturana for Island Locator Magazine. Then I did a feature on her for Variety. It was followed up with an article for the 70th Anniversary of the Battle of Saipan coffee table book.]

It was one dinner she couldn’t forget, and not because the meal itself was extraordinary. It was their last time to eat together as a family.

Ten-year-old Kimiko Nishikawa could feel the seriousness of the situation. Although she could barely understand Japanese, she knew the anguished plea of her father for them to love one another, love others and never be lazy.

As her father performed what she thought was a wine ceremony to bid each other goodbye, she scanned the faces of her siblings and her parents, seeing grief written all over them. Everyone was in tears.

They all feared it would be their last time to sit at the table together as a family.

Time was of the essence. They moved quickly after dinner, packed their things and got ready to leave in two groups to rendezvous in Talofofo.

Sister Antonieta remembered that after dinner her “otoosan” (father) told them what to bring. Taiichi, her eldest brother, would carry a bag containing pertinent family documents and cash. Her older sisters Michiko and Nagako, and brother Hiroji were instructed to bring provisions. When everyone was ready, her father ordered them to split into two groups. Her father feared that if a bomb hit them, they would all die in an instant.

Michiko, Hiroji and Nagako were the first ones to leave en route to Talofofo where they would all meet.

With a heavy heart, they moved to a cave packed with other Japanese. Fear gripped them in the caves, believing that a bomb would soon hit them. And so it did. In the explosion, young Kimiko was hit but she managed to survive.

Sister Antonietta recalls that even as  a young girl, she wondered how her father managed to find hiding places where it was easy to get food and water. “I think my father had been planning for a long time,” she says.

To slake their thirst and stave off hunger, Mr. Nishikawa and Taiichi would fetch rainwater and get food at night, stealthily wading through a labyrinth of sugarcane fields.

The rustling of the sugarcane leaves betrayed them one night. Shots were fired and Mr. Nishikawa fell to the ground.

Taiichi managed to bring his father back with him to the cave where he did not live to see another day.

With the Nishikawa patriarch gone, Kimiko recalled her mother making the boldest of decisions: to go back home.  Mrs. Nishikawa mustered the courage to navigate through the thick sugarcane fields in pitch-black darkness. Grief stricken, discombobulated, hungry and thirsty, they tried to find their way back to their farm.

Then they heard gunshots. Her mother was hit. She thought her mother had been killed that night. But there was no time to grieve and no time to think of what to do with her. She and her brother scampered to safety. They ran as fast as they could as if ferocious dogs were chasing after them.

She lost her brother but she found herself in the company of Okinawan women who took her with them in a search for safer ground.

Later, while walking in the jungle, she and her brother were once again reunited. However, their reunion was short-lived. A few days later, the survivors were taken to Camp Susupe.

Believing she had been orphaned, Kimiko saw in Alcalde Ada a glimmer of hope when he showed up at the camp and took her to the Chamorro camp. Before the war, she had lived with the Ada’s during part of the week.

Mr. Ada revealed to Kimiko that he found her mother at the hospital. She said she remembered meeting her mother again before she died.

With her mother gone, Mr. Ada took Kimiko with him back to his family. However, he could not adopt Taiichi because non-Japanese could not adopt Japanese males. Then, the Japanese were repatriated back to Japan.

At the camp, with a new family, Kimiko subscribed to a new faith. She was baptized Catholic and assumed the name Antonieta Ada.

After the war, the Ada’s lived in Chalan Kanoa where Antonieta went to school. Years later she would become an accountant.

Growing up in Chalan Kanoa, Antonieta and the Ada family would visit the Mercederian nuns at the convent. Through these visits, she developed a fondness for the work of the Church. Later she realized she wanted to become a nun.

From 1966 to 1970, Sister Antonieta attended St. Mary’s College in Leavenworth, Kansas where she obtained her degree in accounting.

She came home for year after graduation, then was assigned to Palau until 1972.

Through all the years that she has been a nun, all Sister Tonie has wanted is to serve God.

In the convent, she said, “I am safe from the war.”

Sister Tonie said God works in mysterious ways, and this was how a little girl ended up being raised by the Ada’s. She was thankful that God brought her to a loving home. The Ada family’s love helped erase the sad memories of the war. And that same love helps her find her peace in the company of the Mercedarian Sisters and in the work which allows them to share God’s abundant love.