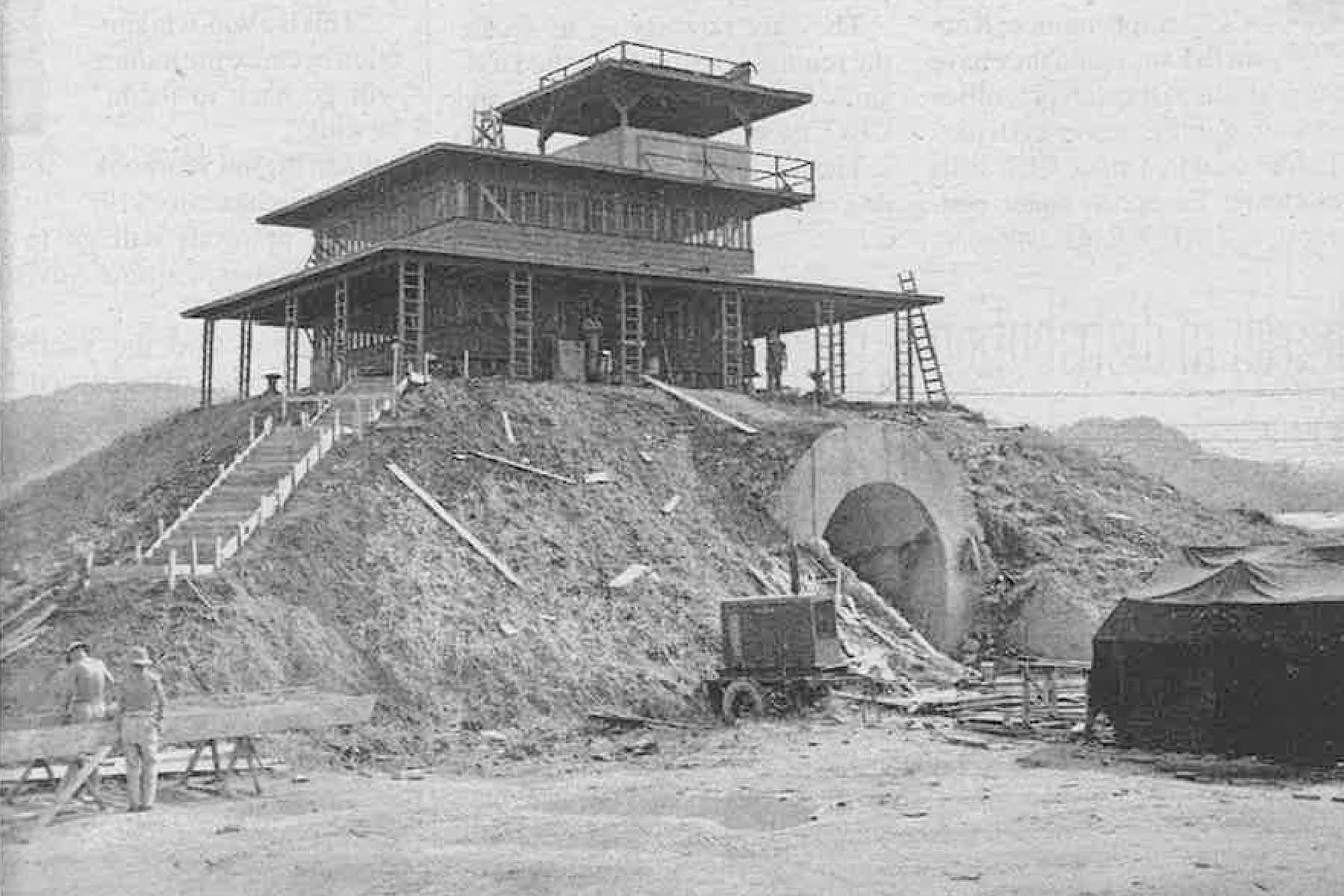 AN archaeological survey conducted in the area on Saipan previously known as the U.S. Central Intelligence Agency’s Lower Base revealed significant structures built by the Japanese at what used to be a Japanese seaplane base long before the American invasion in 1944.

David G. DeFant, who formerly served as a director of historic preservation programs in the CNMI, Palau and American Samoa, and who served as principal investigator and office manager for Southeastern Archaeological Research Inc. on Guam at the time he presented at the 2012 Marianas History Conference, described the surviving structures as “remarkable.”

“The construction evidence on the ramps and all the other buildings and facilities is quite extraordinary. It’s very well engineered,” he said, adding that these were in sharp contrast to those built shortly before the 1944 invasion that were done in a hurry.

Back in 1987, the Commonwealth of the Northern Mariana Islands’ Historic Preservation Office, or HPO, conducted an initial investigation that identified 14 features comprising the former Japanese seaplane base.

In 2011, Micronesian Archaeological Services, or MARS, and ARCGEO Inc. undertook an archaeological survey and monitoring investigations that revealed previously undocumented features of the WWII Japanese seaplane base at Puntan Flores.

For DeFant it is without question that there could be more buried features of the former seaplane base, and efforts should be directed toward preserving the extant structures.

What surprised DeFant and the team that worked on the survey was the quality of the constructions. DeFant showed how the concrete drainages in particular are well-built. “The drainage system was beautifully engineered, and still functioning today,” he said back in 2012 during the first history conference at the Hibiscus Hall of the Fiesta Resort hotel.

He said that differentiating between structures built by the civilian Japanese, military Japanese, and the U.S. military “took a lot of work. It took a lot of comparison of concrete examples to definitively say that the particular feature was Japanese or American in origin.”

DeFant acknowledged that most of the materials in his study were obtained from American military sources which he admitted may have excluded Japanese and indigenous perspectives and involvement in the site.

These deficiencies, he said, can be remedied in the future.

DeFant said the construction at the Puntan Flores began long before WWII broke out with the seaplane base built in 1934-1935.

He mentioned about a controversy before the construction of the seaplane relating to a hypothesized militarization of Saipan and which involved infrastructural development and improvements to the port and to Aslito Airfield. This controversy, he said, later led Japan to formally leave the League of Nations and the Washington Treaty of Naval limitations as well.

[According to the UPI Archives, in a report dated Feb. 24, 1933, Japan withdrew from the League of Nations over the body’s censure of Japan’s incursion in Manchuria.

Japanese delegate Yosuke Matsuoka’s plea for the members to disregard adopting the report that called for Japan to withdraw from Manchuria fell on deaf ears.

“Japan will oppose any attempt at international control of Manchuria. It does not mean that we defy you, because Manchuria belongs to us by right,” Matsuoka was quoted by the UPI in its report, with Matsuoka convinced that Manchuria was theirs.

For Matsuoka, Manchuria was “a matter of life and death for Japan, and than no concession or compromise was possible.”

He argued against an international control of Manchuria, saying “Would the American people agree to such control of the Panama Canal Zone; would the British permit it over Egypt?”

Meanwhile, when Japan acquired the former German colonies consisting of the Northern Marianas, Carolines and Marshalls, under the League of Nations Class C Mandate, it was permitted to administer these islands as an integral portion of the empire provided it did not build any military fortification.

But Japan was leaning toward flexing its military muscle in the Far East with a surreptitious plan to establish an airstrip, and later, a naval air base in Aslito before WWII began.

According to the research by Australia National University’s Wakako Higuchi and the Northern Marianas Humanities Council’s executive director Scott Russell, the control of the islands transferred from the interim naval government to the Nan yocho or South Seas Bureau, a civilian administration. in 1922.

Under the Nanyo cho, Saipan had a burgeoning agricultural economy with Matsue Haruji establishing a sugarcane industry there under his Nanyo Kohatsu Kabushiki Kaisa or NKK company. The NKK had acquired a vast expanse of flat land in Aslito.

Later the Japanese Imperial Navy asked NKK to cede 245 acres of this Aslito farmland for conversion into an airstrip and to keep this under wraps to avoid stirring the suspicions of the Americans on Guam.

By July 20, 1933, Japan successfully conducted a military exercise involving 10 Mitsubishi B2M1 carrier attack bombers that took off from the unpaved airstrip from Aslito to Pagan.

This was part of the greater military exercise in the Marianas-Ogasawara area that went on for 86 days. What made this exercise significant was the presence of Emperor Hirohito himself who observed from aboard the battleship Hiei.

After this exercise, the Aslito airstrip was left unused until 1937 when the requirement for an L-shaped airfield necessitated for NKK to cede 1,960 more acres of sugarcane farmland.

The three-year, three-phased construction of the Aslito Naval Air Base resulted in a 1,200m long x 800m wide runway by the end of 1939. ]

Meanwhile, Japanese presence in the region began in the 19th century, and that by 1910, “most traffic at the port was Japanese.”

With development came a significant migration of Japanese to the islands.

“By 1938, 59,000 Japanese, mostly Okinawans, lived in the Northern Marianas,” said DeFant, adding that this was in sharp contrast to the German period when there were only 200 foreigners on island.

Initially, the construction of the seaplane base “was basically civilian.”

He clarified, however, that there were also military engineers involved in the project. He noted that at the same time the Japanese were constructing the seaplane base on Saipan, they were also building similar facilities on Yap and Palau.

In 1935, DeFant said the base was regularly used by a Kawanishi seaplane operated by Dai Nippon Kokku, a Japanese airline.

“This was purely civilian in nature,” said DeFant.

This airline provided regular service between Saipan, Yokohama and Palau and wasn’t fully established until 1938.

The air service went from Yokohama to Saipan, then to Chuuk, Pohnpei, Jaluit and back again.

Based on his research, there was no indication that a military aircraft was based at Puntan Flores prior to 1939.  Before 1941, the base consisted of one seaplane ramp, he said.

Between 1939 and 1940, the Japanese began a formal militarization of Japanese possessions in Micronesia. “This process included the transfer of Puntan Flores base to military control.”

According to DeFant, by 1941, the Puntan Flores base was composed of 65 buildings including two seaplane ramps, steel hangars, shops, semi-underground ammunition magazines, barracks, warehouses and nine air raid shelters.

Compared to the civilian facilities created before the militarization, additional structures “didn’t put a lot of effort into the engineering,” said DeFant.

By 1944, the seaplane base was under U.S. military control, following the invasion.

DeFant said the Americans significantly expanded the facility because of the larger aircraft they were using.

He also said the Japanese fuel bunker was converted by the Americans into a communications tower.

This base at Puntan Flores formally closed, either in 1949 or 1950. Beginning 1952, the base was utilized by the Naval Training Unit of the CIA.

Puntan Flores acquired the name “Lower Base,” DeFant said, because the CIA headquarters were on Capital Hill, otherwise referred to as the “Upper Base.”

The rest of the CIA facility,  down at the Puntan Flores seaplane base, was called “Lower Base.”

DeFant says he recognized the significant role that the Puntan Flores seaplane base played in the history of the islands and WWII.

He suggested that more investigations be done to identify extant structures.

DeFant also expressed his hope that the area would one day be nominated to the U.S. National Register of Historic Places and that efforts should be made to preserve the structures discovered, and the area’s potential for heritage tourism.