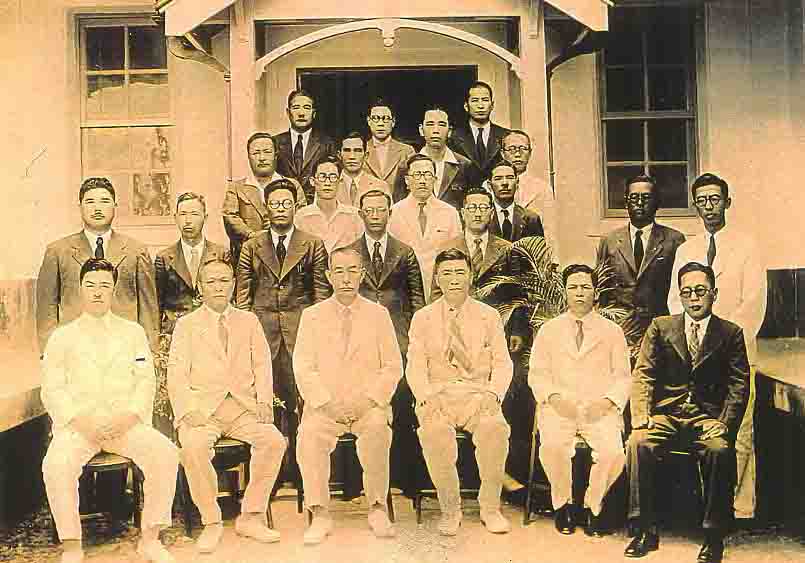 With Germany’s defeat in WWI, Japan took over all of its colonial possessions in the Western Pacific. On October 14, 1914, Japan occupied Garapan on Saipan in the Northern Mariana Islands north of Guam and immediately took over the administration of the islands. Some German settlers remained until they were deported on November 5, 1914.

With the expulsion of the Germans and the withdrawal of warships, Japanese naval rule of the islands commenced. The Provisional South Seas Defense Force was set up with headquarters in Chuuk. The naval government structure was composed of five naval districts: Saipan, Palau, Chuuk, Pohnpei, and Jaluit with each district headed by a naval officer.

Bent on consolidating their stake in Micronesia, Japan sent scientific parties aimed at making maps of harbors, identifying flora and fauna, and seeking all information they needed to defend the islands for their own use.

Japan sought to strike a deal with Britain over the administration of the islands. When Japan provided assistance to Britain in the Mediterranean and exacted heavy casualties on the enemies, this tipped the scales for Britain supporting Japan’s taking over of the islands in the South Seas. With support from the key players and with the United States left out of the negotiations due to its neutral stance, the League of Nations allowed Japan to administer the islands under a Class C mandate-least developed area. With the Japanese administering the islands as part of its empire, the Micronesians became subjects, not citizens, of the Japanese empire.

Class C Mandate is the type of mandate for small or isolated territories.

The United States, however, raised protest over Japan securing the former German colonies over its fears that Japan would militarize the region.

Further, the mandate had a major restriction: the islands couldn’t be fortified for military purposes, a compromise that appeased the United States. It was also agreed that Japan would submit reports to the League of Nations relating to its administration of the islands.

Aside from not fortifying the islands, the Japanese were to submit annual reports to the League of Nations on how they administered the islands.

Meanwhile, eight years after the Japanese naval structure had been setup, a civilian government or the Nanyo Cho (South Seas Government) was formed in 1922 as a requirement of the Mandate. The headquarters were relocated from Chuuk to Koror, Palau. The Nanyo Cho governor was vested executive, judicial, and legislative powers.

On Saipan, the administration office was set up at the site of the former German Administration building in Garapan.

There were early attempts at establishing a sugarcane industry that relocated thousands of Japanese workers to Saipan. Subsequently, the sugarcane plantations went bankrupt leaving behind its workers to fend for themselves.

Then entered into the picture Matsue Haruji. He was educated in the United States, and had worked in a Pittsburgh sugar company that produced cubed sugar. He set up Nanyo Kohatsu Kaisha, or NKK.

With the backing of the Nanyo Cho, Matsue put the stranded workers to work and recruited more in Okinawa.

Matsue, who would later be called “Sugar King”, utilized the railroad built by the Germans to transport sugarcane from the plantation to the sugar mill in Chalan Kanoa where the Mt. Carmel Church is now located.

To rid the plantation of infestation, NKK ordered for the burning of all cane fields. Having weeded out the weak varieties of sugarcane prone to infestation, Matsue introduced new insect-resistant varieties. Workers were trained how to trim cane and introduced competitions among plantation teams. Matsue infused more capital to complete the railroad project that went all the way to the Sugar Dock.

NKK decided to expand the sugar industry to Tinian where they found a more suitable soil for sugar plantations. Tinian appealed to NKK because it had no local population at the time, land was more flat than Saipan and soil was better.

There were efforts to expand to Rota as well but the NKK realized soil there was not suited for sugarcane farming as evidenced from low production levels. Instead of farming, Rota’s phosphate mining appeared more lucrative. In contrast, on Saipan, there was limited bauxite and manganese mining.

At the time, social hierarchy was very discernible. The social order during the Nanyo consisted of a three-tiered system: first rank, Japanese from the home islands; second rank, Okinawans and Koreans; third rank, islanders (Toming). The “Tomings” were further divided into Chamorros and other Micronesians referred to as “Kanaka”.

Meanwhile, the education of the locals was not in the same level as during the German administration. Local children could only attend kogakko school for three years while the Japanese attended eight-year primary schools called “shogakko”.

Unlike in German period when German language was optional and offered only to adults, learning Nihongo, the Japanese language, was made compulsory. Half of the time spent in classrooms was devoted to learning Nihongo while the rest would be spent on moral education, math, geography, gymnastics, and handicrafts. Students were inclined to learn by rote memory and induced to follow authority or face corporal punishment.

As to the practice of their Catholic faith, the islanders were able to do so but with the absence of a priest from 1914-1921 until the arrival of the Jesuits in 1921 and the Mercedarian sisters in 1927. During the absence of the clergy, Gregorio Sablan (Kilili) kept the religious records.

Japan had remained leery of the Americans who had control over Guam south of Rota. There had been frequent intelligence gathering in the guise of scientific or medical research to look into whether the United States had been fortifying the island of Guam. The Americans, on the other hand, were doing the same. Informants were sent to the islands to study the movements of the Japanese. Major Hans Hornbostel, who was then working for the Bernice P. Bishop museum in Hawaii, made several trips to Saipan, Tinian, and Rota to conduct archaeological studies. He was, according to Dr. Dirk Ballendorf in his 1976 article on intelligence gathering in Micronesia, a good informant for the governor on Guam.

In the 1930s, Japan began building airfields in the islands. In conjunction with a massive military exercise, the Japanese attempted at launching planes from Aslito airfield to Pagan airstrip as Emperor Hirohito was out at sea on a ship observing.

The fortification of the islands was beginning to take shape.

Not very long, Japan’s surprise attack on Pearl Harbor and other American military installations in the Pacific led to the United States to declare war against Japan. The Pacific Theatre of WWII had begun.