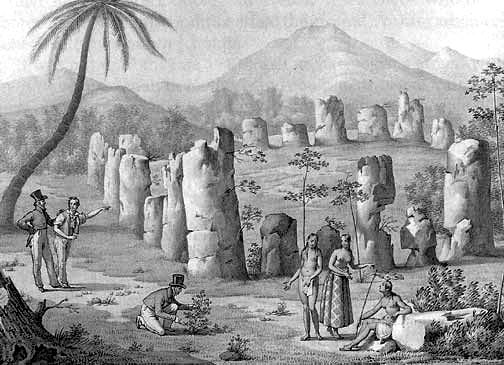 Cut off from economic and political developments on Guam and Saipan at the time of the islands partition into American and German colonies, Rota became a refuge for Chamorro culture and tradition.

According to German-born Australian scholar Dirk H.R. Spennemann despite Rota being cut off from the rest of Micronesia, it has retained much of its cultural identity and thus became a cultural reservoir.

Spennemann analyzed the conditions on Rota during the precolonial and colonial periods—during the Spanish and German periods.

Spennemann said that traditionally, Rota served as an important stepping stone between the large and populous island of Guam in the south and Saipan and Tinian to the north. This changed, according to Spennemann, with the partitioning of the Marianas in 1898 when Guam became an American colony and the Northern Marianas came under German control.

With the typhoons frequenting the islands, Spennemann inferred that typhoons most likely served as a driver of social network in the Marianas in the way as it had been on Yap, Carolines, and Marshalls.

During the Spanish period, Rota “moves to become a cultural reservoir being cut off from developments happening on Guam and on Saipan.”

At the time of the resettlement of the Carolinians and Chamorros between 1860s and 1890s, Spennemann said, Rota became a stepping stone again. Based on the records that he checked, Spenneman said that there was an imbalance in population distribution in the islands at this time. There were between 5,000 to 7,000 people living on Guam, 1,300 on Saipan, 480 on Rota, and only 5 on Rota.

Spennemann also remarked that there was a strong interlinkage between Tinian and Rota at this time which changed only when Guam came under American control and Rota and the rest of the Northern Mariana Islands under the Germans.

At the time when most of the islanders were transplanted to Guam, Rota had not been depopulated.

When the Germans acquired the islands from the Spaniards in 1898, Rota became isolated from the rest of Micronesia when the Germans outlawed mobility with the use of small canoes. This made it impossible for the residents on Rota to have contact with the other islands.

“The Germans were not fond of people’s independence,” said Spennemann, commenting on the ban in the use of small canoes.

Spennemann said that the only vessels plying the route were those of licensed traders and occasionally, there would be Japanese and Chinese vessels visiting the area.

From the time of the islands acquisition by the Germans in 1898 from the Spaniards up to their turnover to the Japanese in 1914, Germans set up a three-tiered administration among its Pacific colonies— from Saipan to Rabaul and then to Berlin. With communication to Berlin taking 90 days, 45 days for mail to reach Berlin and another 45 days from Berlin to Saipan, German administrators needed the autonomy to run the colonies.

And the first German administrator for the Northern Marianas Georg Fritz made the most of his autonomy and instituted several policies which in effect promoted the development of the islands.

Fritz, who spoke German and Spanish and made the effort to learn Chamorro and Carolinian, wanted the islands to be self-sufficient.

For Fritz, in order to have economic development in the islands, he needed people. To induce population, Fritz offered the vast public land at the Germans disposal to the people as a gift and incentive.

Spennemann said, “Fritz policy on land ownership in the NMI was only for the Chamorros and Carolinians.” He added that the Germans under the leadership of Fritz, abrogated the policy preventing the locals from using the land as a collateral in loans.

Spennemann also said that Fritz offered land as a wedding gift to the islanders and even provided tax relief to those who would bear more than eight children.

With Fritz encouraging marriage among the locals, Spennemann also commented that Germans discouraged intermarriage with the local islanders although they induced repopulation of the islands by offering land to people who would marry and have children.

For Spennemann, during Fritz’s administration of the islands, “Rota became a stable Chamorro island.”

Especially at the time that Guam became American colony, Spennemann said, Chamorros and Carolinians on Rota would be needing a passport in order for them to cross over to Guam.

At this time, communication was cut off from the rest of the islands and Rota was left marginalized. The Germans, as Spennemann said, were not fond of people’s independence. Thus, inter-island communication was stopped with the use of small canoes outlawed. There was very limited communication. The only vessels that would dock on Rota were commercial vessels with trading license.

Not only did the Germans under Fritz leadership in the islands advocated land ownership by the locals, schooling was also made compulsory and the Chamorros were allowed to have savings in the bank. The Berlin-based government, Spennemann said, feared that with them becoming financially independent, the government would sooner or later have no control over them.

Spennemann said that in 1904, an imperial station was set up in the islands and administered by a stationsleiter with Volker Reichel as the first stationsleiter.

Spennemann gathered in his readings of the archives that some of the duties of the stationsleiter were to check trading vessels for health certificate and confirm if the vessels had stopped on Rota. He also added that only ships which had been certified, or owned by residents in the German Marianas or Carolines or those in possession of trading license were allowed to conduct trade in the region.

Moreover, the official was also required “to compile an inventory of all government-owned items that are already on Rota or that you will take with you to Rota.”

With the islands coming under Japanese control in 1914, the Germans had to leave the islands except for those who stayed on Rota. Elsewhere in the Pacific where the Germans had colonies, Spennemann said that the Germans properly turned over all records to succeeding colonizers or administrators.

Most of the confidential files on the Marianas had all been destroyed by the Japanese and only those sold by the Germans to Australia and those that they kept in Germany remained extant.

Spennemann lamented that “some archival materials we don’t have.” He also highlighted the need for such records as civil registry to shed light on marriages, population, among others, during the German period.

As for physical structures, there remained a few edifices in the islands that existed during the German period and Rota has the only German colonial structures left in the former colonies. These structures include a convent and the Sta. Lourdes church on Rota.