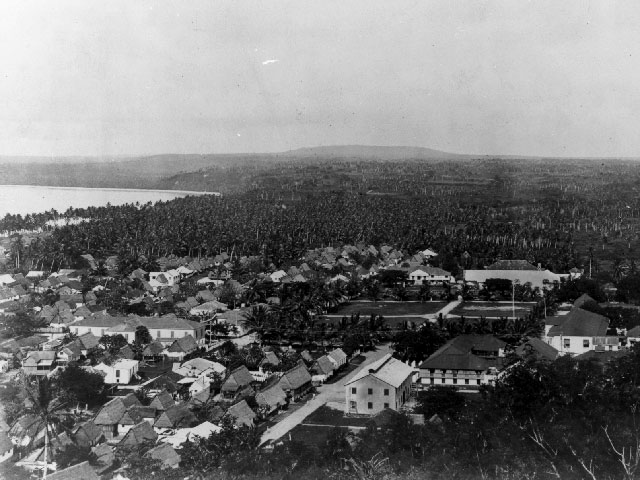 If one were to conduct a research on prewar Guam, The Guam Recorder would be an ideal starting point.

The publication, a well-respected reading material on and about the island, ran from March 1924 through November 1941 just before WWII broke out.

The first Guam Recorder was published in March 1924, by a local firm called the Guam Press Association. Lieutenant P. J. Searles, USN, was the editor and Mr. William W. Rowley was the owner, publisher, and business manager.

Rowley was a Navy man who was literally ‘tossed by fate’ into the profession of journalism. He was a chief machinist stationed aboard the USS Yosemite, the ship which, in August 1899, brought Guam’s first American governor to the island.

Rowley was aboard the Yosemite on November 13, 1900, when a devastating typhoon tore the ship from her moorings in Apra Harbor, drove her over the Calalan Bank (which juts out from Cabras Island), and swept her to sea. Two days later the Yosemite was sighted by the collier Justin, and the officers and crew were moved from the doomed ship. The survivors were returned to await the arrival of the next transport to take them back to the mainland. During the more than three months that Rowley had to wait for the next ship, he became so fascinated by the charm of the island that he ‘resigned’ from the Navy to make Guam his permanent home.

In 1933, Rowley sold his paper to the naval government which took the helm of its operations until its closure in November 1941, a month before WWII broke out.

It had such information as demographics and movements of not only ships, but also residents and off-island guests.

It bore lists of births, weddings, and deaths per village on Guam.

For instance, in its March 1931 issue, The Guam Recorder published that there were 68 children born from January to February 1931: 39 males and 29 females. From Jan. 16 to Feb. 11, there were 3 illegitimate births.

Some of the babies on the list were Judit, son of Jesus and Maria G. Camacho of Agana; Rita, daughter of Vicente and Maria P. Jesus, Agana; Jose Babauta, son of Venancio and Ignacia S. Babauta, Agat; Jesus, son of Francisco and Manuela M. Reyes, Piti; Ignacio, son of Jose and Amalia S. Toves, Sumay.

There were 13 marriages in this same period and The Guam Recorder also listed down the couples’ names per village.

Moreover, every issue would share an interesting history of the island, fauna and flora collections, activities of the military, establishment of schools, businesses, politics both on the mainland and on island, among a wealth of interesting topics.

One may also find interest in making a list of the locally owned businesses that had been advertising with the publication, the copywriting style of the time, as well as the graphics design of the ads.

The Guam Recorder may bring joy and pride to a Guam resident. Consider its short feature on Guam aquatic prodigy Vicente Acfale Champaco in its April 1924 issue as an example. The paper stated that he could plumb the depths of the sea up to 120 fathoms.

It also usually published the Guam Naval government’s orders and notices which could pique the interest of legal researchers.