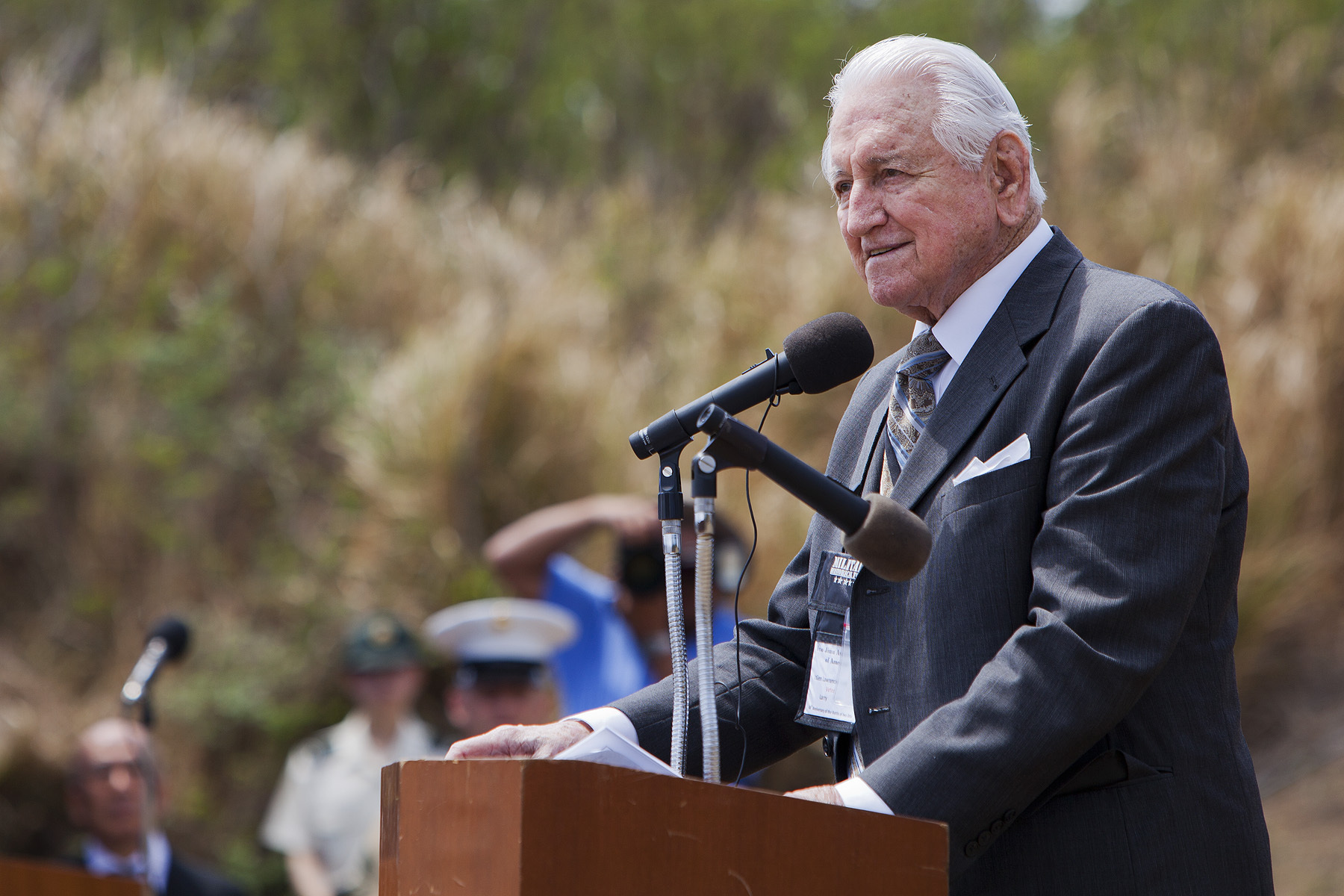 FREEDOM comes at a cost.

So said U.S. Marine Corps Ret. Lt. General Lawrence Snowden in an interview with this reporter at the VFW Saipan Post in March 2012 following his trip to Iwo Jima.

He said the young generation should look at Iwo Jima, Korean War, war in Afghanistan and recognize that freedom costs something.

“What I know to be true is God continues to bless America in providing young men and women who are stepping up to volunteer, who are serving and serving well,” he said.

Asked to comment on the U.S.’s role in the wars in Iraq and Afghanistan, he said, “It is hard to talk about that without having a mix of personal feelings.”

For Snowden, at the height of the U.S. involvement in Iraq, “I wasn’t convinced that the weapons of mass destruction were in the hands of the bad guys. I felt we went into Iraq in the wrong basis.”

Despite his opposition to going to war in Iraq, Snowden said, “Having done that, once you’re there, then we have to do whatever we could do to complete the mission.”

As for Afghanistan, Snowden believes that it is turning out to be a much longer and more troublesome process.

He noted the dominance of tribal chiefs who are opposed to a strong central government that impacts the ways they raise their money as tribal chiefs.

As for the U.S. military presence there in Afghanistan, he said, “Ultimately, we have to say we have done our job here and we are going home.”

However, for Snowden, whether the U.S. wants to or not, may take years of finding out.

For those suffering from post-traumatic stress disorder, he said, “I don’t have any answers to that.”

But he said he knows that PTSD doesn’t surface for years.

He also said that going to war and killing people creates troublesome memories.

“Over time, either your mind handles that or it doesn’t,” said Snowden.

He remembers  a friend who took part in intense fighting in Vietnam that up to this day continues to seek psychiatric help “to help him understand the pressures of what he did.”

Describing PTSD as a “dreadful issue,” Snowden also anticipates that this may exact its toll on the country by way of rehabilitation costs for many years to come.

“I think any young man or woman ought to give some service to the nation,” he said.

He said for the young men and women to be drafted at the age of 17.

However, he said, they should be given choices.

He suggested that they can serve in the peace corps, or do volunteer work for hospitals where they are needed by various organizations, among other services to the nation.

He said, “I think everybody ought to do something for the security of the country.”

At the time they landed on the beach on what is now the location of the Pacific Islands Club, Snowden said, they didn’t see the beauty of it. “The beach had been scarred by bombs and all kinds of junk let lying around.”

Snowden told this reporter that the beaches are “beautiful now and can be appreciated for what they are.”

Having fought in several significant battles, Snowden believes he is just lucky to have survived. “I supposed I am an experienced warrior.”

To Snowden, the experience on Iwo Jima was incomparable as he called it “the bloodiest battle of our history.”

He said there’s no question that the Battle of Iwo Jima stood out. “We were fighting, hand to hand combat.”

Although he acknowledged the subsequent wars in Korea and Vietnam were intense, for Snowden, it was nothing like what they had on Iwo Jima.

He said he was a 23-year-old captain when they landed on Iwo Jima on Feb. 19, 1945. “My company was an assault company. We were the first and second troop waves,” he said.

He narrated that once they reached the shore, the battle intensified.

“It was a terrible, terrible event,” described Snowden of their first day.

He said the Japanese were trying to carry out garrison commander General Tadamichi Kuribayashi’s order to let the American soldiers get beyond the shores and open fire at the oncoming Americans.

“They just unloaded everything,” said Snowden describing the heavy artillery and mortar rounds.

He said, “The real problem was we were on Iwo Jima, the Japanese were IN it.”

For Snowden, that spelled a tremendous difference for aerial bombing and naval gun fire.

“Some Japanese bunkers were protected by 10 feet of reinforced steel with heavy earth formations on top of that,” said Snowden.

He said at that time, American aerial bombs were all point detonating, “as soon as the nodule of the bomb touched the earth, it exploded.”

He said with the Japanese 25 feet below the surface, “that didn’t bother them very much.”

“Despite the tremendous shelling form the battleships and aerial bombardment, we didn’t do much to damage the heavy emplacements that they had so cleverly placed and conceived,” explained Snowden.

For 36 days, the Americans endured violent warfare to capture the island and declare that secure which up to this day is best captured in a photo of American soldiers planting the American flag on Mt. Suribachi.

“It certainly occupies a unique place in the Marine Corps and United States history,” he said.

“We landed here on the 15th of June 1944, on the beach where the Pacific Islands Club is now located,” he said.

While on Saipan in 2012, he met students at the VFW Saipan Post and he reminded them how freedom was bought for a high price: in human lives.

“The young people need to be reminded of that. My only suggestion is they read history and understand that they are free because of what others did,” Snowden said.

He also recognized President Harry Truman for his “political courage to drop the bomb,” which he said had saved over a million lives.

Addressing the students, he said, “To you young people who haven’t served yet, I think you have an opportunity to do so. We are going to need generations after generations to serve in the Armed Forces.”

He continued to talk about the benefits of freedom enjoyed by the present generation. “I sit in relative freedom…and having some comfort in my mind that I helped bring that about.”

Unfortunately, for Snowden, the fight to preserve freedom continues. “Where are we today, we are still engaged in the long and protracted war with international terrorists.”

He added, “We are going to keep our push to maintain our defenses against international terrorism. The job isn’t finished.”

In his trip to the island in 2015, he said the fundamental purpose was to honor those Americans and Japanese who gave their lives in that horrendous battle on Feb. 19, 1945.

Fielding questions from the members of the III Marine Expeditionary Force public affairs group, the three-star general lauded the strong bilateral relations of the United States and Japan, which he said was the strongest among free nations “bar none.”

The battle on Iwo Jima, according to the general, consisted of 73 days of bombing and many days of naval gunfire.

“The fact is, young men from both sides did what they were sent to do. None of us who were here wanted to be here…Once we were here we did what we had to do,” he said.

Addressing the young Marines before him, General Snowden said his most effective weapon on Iwo Jima was neither the flamethrower, tanks nor the rocket batteries; it was the company commander who had nothing else on his mind other than to accomplish the mission.

He had a distinguished military career. In his 37 years of service, he served in the Battles of the Marshalls, Saipan, and Tinian as platoon and company commander; he was company commander on Iwo Jima. In Korea, he served as battalion executive officer while in Vietnam, he was regimental commander. He also served as chief of staff of the U.S. Forces-Japan for three years.

In 1979, while serving as the chief of staff  of the Marine Corps headquarters in Washington, D.C., he retired with the rank of lieutenant general. After retiring from the service, Snowden was appointed vice president of Hughes Aircraft International Service Company. He also became the first president of the American Chamber of Commerce in Japan. In 1983, he addressed the Japanese Diet on U.S.-Japan trade issues. He was also Ground Systems Group Hughes Aircraft international vice president until he retired in 1988.