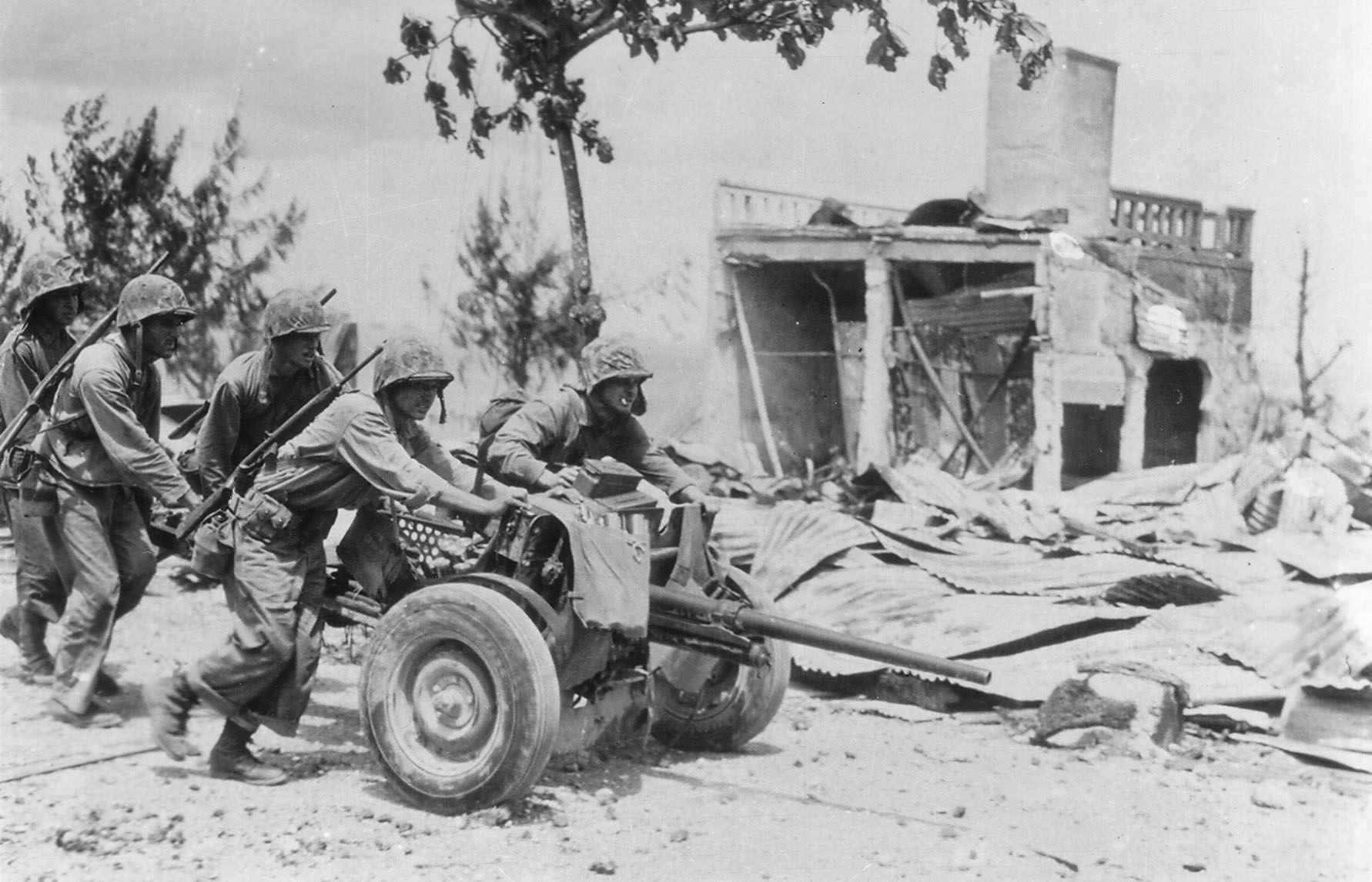 A photograph of a Marine carrying a boy on his back struck Ed DesRosier when he visited the American Memorial Park on Saipan in January 2013. The enlarged photograph was captioned, “Unidentified Yank Marine cares for orphaned child.”

Ed had seen small copies of this photograph many times among his father’s belongings. The Marine carrying a local boy on his back was no other than his father, Fred Leroy DesRosier.

Fred was a scout and a sniper with the Second and Fourth Marine Divisions. He was among the hundreds who landed on the beaches of Saipan on June 15, 1944.

Fred DesRosier was quoted by the Western Ag Reporter as saying, “Surviving that kind of gunfire was like dodging raindrops in a rainstorm.”

And he did not part only in the invasion of Saipan. He was also with the Marines that stormed the beaches of Tinian the following month. Altogether, he spent 15 months in the Northern Marianas.

After the atomic bombs had been dropped on Hiroshima and Nagasaki in 1945, and following the official surrender of Japan in September 1945, Fred spent the rest of his time in the military camp in Nagasaki at and around “ground zero” where according to the Western Ag Reporter’s Veteran’s Day article in 2013, was where he was exposed to radiation. Fred’s friend died from leukemia as a result of this exposure.

He took his honorable discharge in 1947. This exposure to radiation later resulted in Fred getting the nickname, “Atomic Veteran.”

Meanwhile, Ed, who was on Saipan in January 2013, and who finally gave a name to the face in the photograph, said, “As the youngest of three boys, all of us were fascinated by the war stories my father told us.”

He said he and his brothers heard more than his three younger sisters did.

“I think it was therapeutic for him to be able to talk to us about his experiences. Often it was at the hunting camp around a wood fire and into the night that he shared some of the adventures both exciting and horrific. I remember poring over a couple of photo books he had always kept in his room– pictures of his buddies, battle scenes, and beautiful natives of the Island of Saipan. The jungle and the beaches were so far removed from our home here in the Northern Rockies of Montana,” he said.

Ed said they tried not to ask their father too many questions.

“We could tell some things were still very disturbing for him and still are,” he said.

He also said that the pride in his service to his country as a scout and sniper was one of the great strengths of his being.  “He is a very humble man and respectful of all who have ever served our country!”

He said his father had many recollections of the stories and events he shared with them.

“The terror of battle is something I will probably never know.  The times he spent after the combat were enjoyable to him in helping the orphans left behind. Raised a Catholic, he related strongly, I think, to the good will of the Spanish Nuns and helped out anytime he could.”

Ed said his father and a buddy would swim to the Navy ships a few miles out and trade for many things, swimming back to shore loaded up with beer for them and treats for the children.

“He also had a friend there from our home town and he would go see him in the recovery hospital as he was wounded.  Sometimes he stayed way too late and had to walk several miles back to camp in the dark. He had developed excellent night vision and awareness,” said Ed.

Ed hopes there will never be another time like the one his father’s generation experienced.

“Hopefully we will never again be attacked by an enemy that tries to dominate the world.  It had a profound impact on the very being and soul of who my father became. As a young boy to survive two combat landings, Saipan and Tinian, and to live life to its fullest, is truly a blessing for him and all of us in his family!  He fathered us six children and raised us with high morals and values. His 30 grandchildren and 14 great grandchildren are a constant reminder of the good in life that was worth fighting for in those battles. We are grateful that this generation learned and taught us what freedom means and that we can never take it for granted,” he said.

The DesRosiers were not able to make it to the 70th Anniversary.

“I hope to return one day as it was a time- stopping moment for me there last year discovering my dad’s picture on the wall of the American Memorial Park with the orphan boy on his shoulders!” he said in 2014.

Two years after the 70th anniversary of the Battle of Saipan and Tinian, the elder DesRosier passed away on October 2, 2016. He was 91.

Fred, who was born in Kalispell, Montana on Oct. 8, 1925 to Peter Leroy DesRosier and Freda Campbell DesRosier, was an only son and lived his entire life in Browning.

His obituary underscored that Fred received his high school diploma while serving on Saipan.

He spent many years in various occupations in his hometown including serving as a councilman, police commissioner and a volunteer firefighter.

His obituary stated, “his life of helping others is why he is remembered and honored in Saipan, having rescued orphans from the combat and working many days and weeks to ensure they would remain safe and protected.”