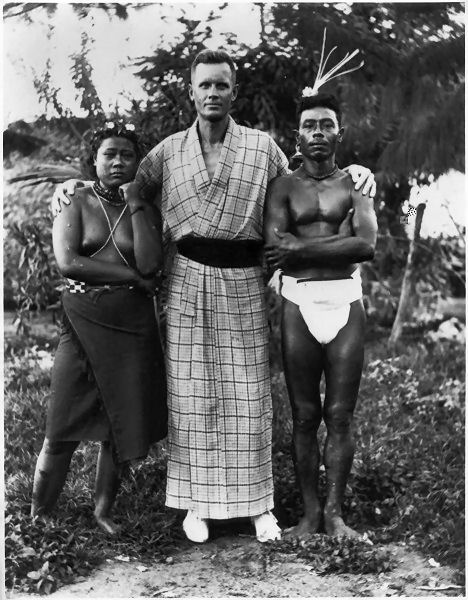 A veteran of the Spanish-American War and WWI, and a scholar, Hans Hornbostel, in the early 1920s, was tasked to photograph, map the Mariana islands, and gather specimens for the Bernice P. Bishop Museum in Honolulu when he began working there in 1922 as a collector. While on Rota, as he was getting acquainted with the terrain, he went to the heart of the jungle where he ran into a retired fighter who identified himself as Juan Manibusan.

Hornbostel was surprised to hear the man speak in Limehouse (cockney) accent.

In his article for the Philippine Magazine (March 1935 issue), Hornbostel said Manibusan spoke in “the best Limehouse cockney I had had the privilege of listening to for many a year.”

Describing Manibusan, Hornbostel said he was a very old man who had a full head of hair—white hair.

Deep of chest, broad shouldered, narrow hipped, his whole upper body was covered with patches of white hair. The hair on his head was thick and was also white, and although he was a very old man, he still carried himself well. His flesh was firm, and his skin healthy, and he seemed to have retained much strength in spite of his age. I noticed that his nose was badly battered and that his ears were cauliflowered.

He found out that Manibusan had lived in London for many years and his passport out of the islands was his recruitment as crew member of an English whale ship that anchored off island in his youth. Manibusan narrated to Hornbostel that he had had a fight with another crew member who suffered severe blows from him. Upon reaching London, having experienced first-hand Manibusan’s pugilistic prowess, Manibusan’s fellow crew member arranged for the Chamorro fighter to enter bare-knuckle fights and he would be his manager. Manibusan toured across Great Britain winning fights. With a slew of victories under his belt, he earned the nickname “South Sea Island Bruiser.”

Not long after, Manibusan fell in love with a barmaid in Limehouse. He married and had a family. Later, when he became a widower, and his children all grown up and married, he decided to come home to Rota.

Having been back on island, Manibusan would have been a perfect companion to Hornbostel as he was conducting his work. Hornbostel, however, was disappointed that the prized fighter who had seen the world, was hesitant to take him to the eastern end of Rota where the trinchera taotaomona mona (ancient fort) was because of superstition. Manibusan refused to go there because he didn’t want to trespass the area haunted by spirits who were not his relatives. He believed he would get punished should he dared to do so.

Hornbostel could not believe how a whaler such as Manibusan, who had sailed far and wide, had married an English woman, had been raised a catholic, “was still held by ancient taboos which made it impossible for him to know his little island—such is the power of superstition.”

Hornbostel had no choice but to ask his landlord Juan Taitano if he could guide him. It took a lot to convince him and what happened after was a remarkable discovery for Hornbostel, Taitano and the others who went with them. (To be continued)

*Major Hans Hornbostel was advertising manager of the Philippine Magazine in Manila for several years before WWII. From time to time, he and his wife Gertrude would contribute an article to the publication.

Philippines Herald columnist Salvador Lopez praised Hornbostel’s article on Rota as “honest and realistic, written in a vivid style that in places is eloquent and lyrical, but only because it is authentic.”